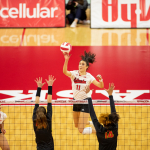 A look at what’s happened in Huskers athletics over the past week.

Nebraska football has a revised Big Ten schedule for 2021. The conference changed the order of games and locations of a couple. The Iowa game is back on Black Friday.

No 4 Nebraska volleyball swept the series with Maryland 3-1 Friday and 3-0 Saturday.

Nebraska track & field competed at the Husker Quad against Illinois, Iowa and Minnesota. No team scores were kept, but several Huskers won their events.

Nebraska swimming and diving split at the Minnesota Triangular, falling 193-107 to Minnesota before defeating Iowa 152-147.

No. 4 Nebraska bowling did not compete this week.

No. 6 Nebraska rifle did not compete this week.

Nebraska women’s tennis competed in Madison against Wisconsin, Iowa, and Minnesota over the weekend. No team scores were kept. The Huskers are home this week to host Northwestern and Illinois

Nebraska men’s tennis did not compete this week.

Nebraska men’s golf opened the season with a pair of narrow losses at the Big Ten Match Play Championships, 3-2 to Iowa and 3-2 to Ohio State.