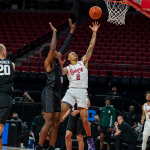 It was a long layoff due to a COVID-19 outbreak, but Nebraska (4-9, 0-6 Big Ten) men’s basketball followed a familiar, pre-pause script.

In the first game in 27 days, the Huskers dug themselves an immediate 7-0 hole courtesy two Teddy Allen misses, an Allen turnover, and a Lat Mayen miss. Mayen hit his next attempt from deep, sparking a 12-4 run. A 3 for Michigan State (9-7, 3-7 Big Ten) then a Dalano Banton and-1 made the score 15-14 Nebraska.

The Huskers would never lead again.

As a matter of fact, Nebraska only made one shot the final 9:25 of the half. The Spartans took advantage of their opponent’s drought to lead 34-24 at the half.

Fred Hoiberg’s team had opportunities in the second half to make the game more interesting. After a 7-2 run cut the deficit to nine, Shamiel Stevenson committed back to back turnovers. Defensively, forced three missed shots and two turnovers.

A Banton layup cut the difference to seven, but the Huskers couldn’t get any closer, falling 66-56.

Statistically, it was an ugly game. Nebraska shot just 36.2 percent from the field, including 3-of-17 from 3. At the line, the Huskers made only 11-of-24. The 17 turnovers are third most in a game this season.

But Michigan State didn’t play well overall either. The Spartans shot 39 percent from the field, making 6-of-23 3s. The 22 turnovers are a season-high.

Trey McGowens paced Nebraska with 13 points. The only other Huskers to crack double digits was Lat Mayen with 10.