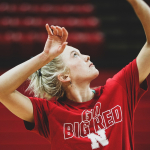 Nebraska volleyball is ranked No. 5 in the preseason AVCA poll. That’s on par for a team that fell a game short of the national semifinals last season.

Another layer to the expectations? The national semifinals and championship being at the CHI Health Center in Omaha. Nebraska has reached the NCAA semifinals in every season the event has been held in Omaha. The Huskers won national titles in 2006 and 2015, and fell in five-sets to Penn State in 2008.

“It’s always a goal to get to Omaha when Omaha is hosting,” Cook said. He added that Omaha may host “the whole thing”, which would fall in line with what the NCAA is doing with the men’s and women’s basketball tournaments.

An entire NCAA volleyball tournament in Nebraska is more than possible, but Cook tempered that excitement by noting that the season needs to get played first, with a tough Big Ten Conference that includes six teams in the top-25, four of which are in the top-10.

“There’s a bigger sense of urgency and every point’s worth more now because you don’t have a month to prepare to get to the Big Ten season,” Cook said. “You gotta be good out of the gate.”

The season begins January 22 at Indiana. That’s 13 months since the regional finals loss to Wisconsin in 2019. A normal stretch between seasons is about eight months.

“We have been waiting for so long,” Stivrins said. “Everyone is so excited. I think this team from where we were last year to where we are now, its night and day. I’m so excited to get out there and show everybody that.

“I know every year we say we’re so excited and we’re so close but this team had no choice but to get close this past year.”

Stivrins, like her coach, didn’t back down from the team’s expectations.

“Omaha 2021 is definitely in the back of our minds,” Stivrins said. “But as coach (Cook) said and as I’ve said before, its just something we need to take day by day.”