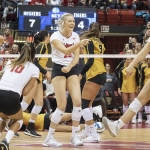 The current schedule, as has been the case in the past, leans on teams playing back to back days. This year, the first and second round games are scheduled for April 8, 9, and 10, the regional games are April 16 and 17, then the semifinals April 22 and the championship April 24.

Voice of Husker volleyball John Baylor says the sport should move away from playing back to back days in the tournament.

“Volleyball is a really rugged sport,” Baylor told Jack Mitchell on KLIN’s LNK Today with Jack and Friends. “For years we’ve always said ‘why are we playing these regionals in back to back days?’ This is a sport where you need recovery.”

A new season calls for a new schedule. Make each round played over two days, like the NCAA basketball tournament.

With a 48 team schedule, spacing games out would lower both the number of games each day and the number of venues needed for playing.

If COVID-19 restrictions are significantly lessened by April, you could play up to four games at a single site in a day, meaning the first weekend would need two sites and the rest could be played at a single site. With the possibility of that unknown, four sites could be used to host games between Omaha and Lincoln at two contests a day.

If using CHI and Baxter in Omaha and PBA and Devaney in Lincoln, the bracket could be divided between the two cities through the regional rounds. Sokol would be used when CHI has event conflicts that are currently scheduled for April 10 and 16.

Ralston, Sokol (when not used for competition), and Snyder arenas, along with area high schools, would serve as practice venues for teams prior to the tournament and while they advance in the bracket.

With 16 teams at each location for the first weekend, both Lincoln and Omaha need hotel rooms to host the players, coaches, support staff, and any fans that would be allowed in attendance or simply traveling to follow their teams. Omaha hosts the College World Series with eight baseball teams, where rosters are much more than that for volleyball, so one city is easily set.

Lincoln is set up well to room multiple teams. The question is number of full service kitchens for team meals and 24-hour room service. Expect those answers to come shortly with area interests researching the possibility. Besides, the number of teams drops in half as the first weekend progresses, so it won’t be 16 teams staying for multiple weeks.

The NCAA has set the precedent of a regionally based championship tournament with men’s basketball and is planning the same with women’s basketball. For everything that Lincoln and Omaha missed due to the pandemic in 2020, regionalizing the volleyball tournament in Nebraska would be a boon to the local and state economy, on top of making too much sense with the available arenas and hotels.