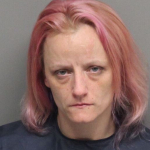 A woman is facing drug charges after Lincoln Police were called to the Red Roof Inn at 3939 N Street Saturday afternoon.  Just before 5:00 p.m. officers responded to the hotel on a report of a disturbance in one of the rooms.  When officers arrived they contacted several people, including 34 year old Robin Collins.

LPD officers had entered the room with Lincoln Fire and Rescue to provide assistance and revive an unconscious female.  Officer Luke Bonkiewicz says while officers were present they observed a number narcotics and paraphernalia in plain view.  Officers took custody of 20 mg of Dextroamphetamine, 5 mg of Diazepam and a loaded syringe of a substance that pre-tested positive for amphetamines.

Officers cited and booked Collins for two counts of Possession of a Controlled Substance.