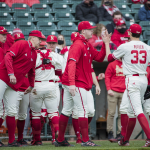 Nebraska had its winning streak ended this weekend, but by winning the series the Huskers are on top of the Big Ten Conference standings.

The Huskers (13-5) rallied twice Friday in an 8-6 win over Illinois (8-10). The win took a season-high five stolen bases and three-hit efforts from both Spencer Schwellenbach and Max Anderson. Schwellenbach also notched his fourth save of the season with a scoreless ninth, striking out the side.

Saturday was nearly another comeback win, as the Huskers stormed back form 5-1 and 8-6 deficits, but ultimately the seven-game win streak was snapped in a 10-8 loss. Anderson added four more hits, while Joe Acker and Jack Steil both homered in the effort.

The Sunday rubber match meant the possibility of Nebraska losing its first series of the season, but the Huskers fought back from a 5-0 deficit, scoring 12 of the game’s final 14 runs for a 12-7 victory. The Husker hitters produced a season-high 16 hits, including four home runs by Acker, Schwellenbach, Jaxon Hallmark, and Cam Chick.

Over the 27 innings, Nebraska notched 42 hits, including nine home runs.

The Huskers are alone atop the Big Ten standings, with Michigan (12-5) playing Sunday afternoon with a chance to tie.

Nebraska is home next weekend for a three-game set against Maryland (8-9).