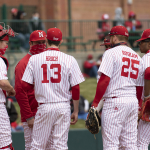 Several upcoming game for Nebraska baseball are having their start times adjusted.

The program made the announcement Tuesday morning. Two of this weekend’s games at Illinois are being moved “Due to forecasted high winds”. Friday will now begin at 6 p.m. and Saturday at 5 p.m., while Sunday remains at noon.

The Huskers are also changing the Friday start times for the next three home series to account for fans being at Hawks Field. Maryland (April 9), Rutgers (April 30), and Northwestern (May 14) will all begin at 6:30 p.m.