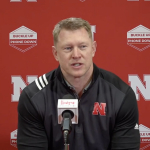 A year ago, those covering Husker football met in person for the start of spring practices. A few days later, the sports world shut down, and nobody has had media availability outside of zoom since.

That continued with the first media session of the 2021 spring practices for Nebraska, though the rest will be in person over the next month. Here’s a breakdown of some of the highlights from Monday.

First and foremost: Nebraska’s most storied rival. Oklahoma was brought up six times Monday. Head coach Scott Frost called the NU-OU rivalry his favorite in all of sports.

“I grew up on Nebraska-Oklahoma,” Frost said. “I can’t count the number of times I was in Memorial Stadium in the snow and other times in November watching those games. Its the one I grew up around.”

Frost said the players are excited to play the game.

“Our players are excited to take their chances against a really good team,” Frost said. “I’m sure Oklahoma, like they have been recently, is gonna be one of the best teams in the country.”

Bill Moos said on Sports Nightly that the conversation stemmed from wanting to boost both the university’s and local area’s financials. Frost echoed those sentiments.

“There was a $40-50 million budget hit to our athletic department and I think  there was a lot of discussions on ways to help with that,” Frost said. “The biggest thing for me as a football coach…now that (the Illinois game) is not overseas, it doesn’t make a lot of sense for us to have a week one bye.

“I think the city of Lincoln is starving, our local economy’s starving for home games.”

Frost added that recruiting would benefit from an additional home game early in the season. The most likely scenario now is that the Southeastern Louisiana game in November gets moved off of this season and another opponent is added to the first month of the fall.

Frost noted that the late start to spring allowed guys to get more done in their winter workouts ahead of the spring. The team just went through testing, “old school testing” as Frost called it, with 40s, 10s, agilities, vertical jumps, squats, and hang cleans.

“Seeing the improvement our guys made in those areas I think gives them a lot of confidence,” Frost said. “Zach (Duval, strength coach) told me all but seven players on our whole roster improved in every single category of testing.”

JoJo Domann said the testing was good for the players.

“To be able to go through winter conditioning knowing that our skillset is gonna be tested at the end of it and could possibly be shared with the world gave us that extrinsic motivation that we shouldn’t necessarily need but is also nice,” Domann said. “I was happy with my results but I’m also looking to improve in every area.”

Barring anything dramatic happening, Adrian Martinez is locked into starting for the fourth consecutive season. So how does this spring play out for the quarterback room?

“I really wanna see (Adrian) limit the mistakes and the bad plays,” Frost said. “I expect Adrian to be the player that he expects to be this year, that everybody expects him to be.”

Only two other players are on scholarship at the position: Logan Smothers and Heinrich Haarberg.

“Smothers and Haarberg are both gonna get plenty of opportunities this spring to show us what they can do,” Frost said. “We get a lot of reps in spring ball so those guys are gonna get a ton of opportunity.”

Offensive coordinator Matt Lubick echoed the head coach in reps being a major use of the spring.

“Reps are the biggest thing,” Lubick said. “Its opportunities for both these guys, because of the numbers we have right now at quarterback, is that they’re gonna get a ton more reps. The more reps you get, the more confident you are.

“We’re fired up to see what they can do.”

Nebraska added Montana transfer Samori Toure and has yet to see full use of Omar Manning, but lose dynamo Wan’Dale Robinson and captain Kade Warner. Frost really likes what he has in Toure and Manning.

“Those are two guys…that could do big things here,” Frost said. “Toure’s gonna make us better in the pass game.”

“The talent’s really good there and I’m excited to see those guys compete,” Frost said.

Lubick says the next step for the young guys, and especially for Betts, is just understanding the offense.

“He’s got a way better understanding (now),” Lubick said. “(Betts) did a good job in the weight room and worked really hard so with reps he’s gonna get a ton better. He’s gonna get a lot more reps (this spring).”

The strength of the team is expected to be the Blackshirts, where several seniors are taking advantage of an extra season from the NCAA. Even junior Cam Taylor-Britt opted for another season over testing the NFL waters.

Defensive coordinator Erik Chinander, even with the returning experience, wants to see improvement.

“First off, you have to improve everyday,” Chinander said. “You can expect a lot of improvement but you have to put it in front of the guys in attainable situations.

“If you can break it down as small as you can, and try to accomplish those goals, then a lot of improvement is very reachable.”

One of the returners, JoJo Domann, said he knows his group isn’t “invincible”.

“But the way we rally and the way we hold down the fort and help control the game for our offense: getting more three and outs, forcing more turnovers, and making the game easier on them, giving them more opportunities to score,” Domann said. “That’s what you’re gonna see from us.”

The culture conversation has been had each season under Frost, and going into this spring it continues. Frost said culture “probably gets talked about until people are tired of hearing about it”.

“But when you have good comradery, good leadership, good culture built on your team, you give yourself a great chance,” Frost said. “Those things aren’t easy to build.”

Frost added that he walked into a good culture when he transferred to Lincoln as player. Having guys stick around for an extra year is something Frost thinks will help the culture continue to develop.

“You can’t do it without good leaders,” Frost said. “That’s why its important that we have some of the guys coming back to join us again this year. Some of the young guys that we have need to step up and grab the mantle and be the leaders.

“We’re closer than we’ve ever been of having a culture the way that the coaching staff wants it.”