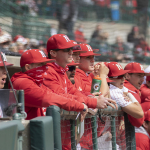 For those without BTN Plus subscriptions, you’ll be able to see more Nebraska games this season.

The Big Ten Conference released its 2021 baseball television schedule Monday morning. The Huskers are slated to play on BTN five times, NET twice, and ESPNU once.

Nebraska will first appear on TV on April 10 in a home game against Maryland. That game can be seen statewide on NET and streamed on BTN Plus. The other NET game is May 15 against Northwestern.

The first BTN appearance is slated for the series opener at Michigan State April 23. The other BTN appearances are May 21 at Indiana and the entire Michigan series (May 28, 29, and 30).

The lone ESPNU game is May 22 at Indiana.