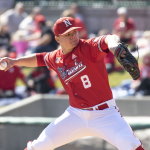 Although Hawk’s field is set to accommodate 2,700 under the health restrictions, there were 2,599 in attendance. That is the highest attendance for a Husker game since March 11, 2020.

Shay Schanaman continued to pitch well, striking out a career-high 10 batters while giving up just two runs over 7.1 innings.

At the plate, Luke Roskam, Jaxon Hallmark, and Spencer Schwellenbach turned in multi-hit performances as the Huskers racked up nine hits on the day. Roskam led the team with three RBIs.

The Huskers are now tied for second in the Big Ten Conference with an identical record to Michigan. Indiana holds the top spot at 11-3.

After sweeping the four-game home series, Nebraska heads on the road to Illinois. The Huskers and Illini are set for a trio of games next weekend.