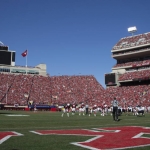 On the same day the Big Ten Conference announced attendance at regular-season contests the rest of this spring will be up to each school and their local health and safety protocols, Nebraska fans learned how many will be allowed into home games in Lincoln.

Nebraska Athletic Director Bill Moos said on Sports Nightly that there are intended numbers for each stadium that could change as time goes on. Those numbers are approximately 2,700 for baseball, 675 for softball, 675 for soccer, and up to 2,400 for volleyball.

“I feel so good for our fans,” Moos told Greg Sharpe on the program Wednesday. “But think of these seniors, especially in these spring sports, who had their seasons cut short last spring and now finally are gonna be able to play in front of some fans.

“This is just tremendous.”

Husker baseball and softball have their home-openers Friday. Soccer has three home matches remaining: March 25 vs Rutgers, March 28 vs Penn State, and April 3 vs Iowa, with Sunday being the first game that fans will be allowed to attend.

No. 5 Husker volleyball has only two home matches remaining, April 1 and 2 against No. 11 Penn State.

All tickets will be for single games.

Tickets for this weekend’s baseball and softball games go on sale to season ticket holders Thursday at 10 a.m., with remaining tickets being made available to the public Friday morning.

Moos did not specify a number for the May 1 football Red-White Spring Game, saying that 50 percent is the current plan but that could increase to as high as 75 percent. Memorial Stadium holds nearly 90,000, which means capacity for the biggest practice of the year could be anywhere from 45,000 to 67,500.

“The spring game environment at Nebraska is unlike anywhere else in the country, and we are excited to welcome Husker fans back to Memorial Stadium on May 1,” Moos said. “We are committed to providing a safe, healthy and fun environment and celebrating the unofficial kickoff to the 2021 football season.”

A minimum of 7,500 tickets will be held for the public on-sale, which opens for purchase April 2.

A release from Nebraska Athletics regarding ticketing adds that the Huskers also have upcoming home contests in men’s and women’s tennis and men’s golf, but those “are non-ticketed athletic events, with spectator limits and health and safety protocols directed by the on-site athletic events manager.”