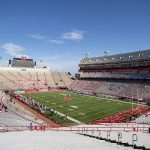 Speaking on KLIN’s Drive Time Lincoln Wednesday, Nebraska University System President Ted Carter told host Kellan Heavican that he’s “frustrated with the current policy of no fans at athletic events, but that he and others, including Council of Presidents and Chancellors member UNL Chancellor Ronnie Green, are advocating for that to change next year.

“I would certainly anticipate that we’re gonna have either very close to or full football stadiums by the fall if we can get to immunity with all the things that we’re doing with vaccinations,” Carter said.

Only family and a select few others have been in attendance for any games involving Big Ten Conference teams since football began in October. The first general fans to see a Big Ten game will be in Indianapolis next week at the conference basketball tournaments.

For the outdoor sports that have either begun last week (softball) or begin this weekend (baseball), Carter was hopeful for fans to be able to watch all season.

“I just wish (the Big Ten) would be more consistent in what they’re allowing,” Carter said. “Especially when we’re talking outdoor sports.

“My message to Husker fans is: we hear you in that frustration. We’re working hard (to get fans back).”

You can hear the entire interview here.