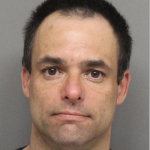 A Lincoln Police officer spotted a black Chrysler van heading north on 10th street and Park Avenue Monday around 11 a.m. and saw the plates had expired in January of 2019.  The officer was checking the registration when the van pulled into a driveway at 9th and Rose Street.  The driver got out and took off running.

The officer learned the van had been reported stolen in September of 2020 and was originally painted red.

Additional officers were called and the man was seen entering a home at 9th and Plum Street.  The officer could see someone was inside the home.  The driver then walked out of the house where 48 year old Daniel Medley was taken into custody without further incident.  The 77 year old man inside the home said he did not know the suspect and that he tried to force his way inside.

Officers searched the van and found several catalytic converters and power tools.  They are now trying to determine what vehicles they were taken from.

Medley was arrested for felony Theft by Receiving, Criminal Trespassing, Unauthorized Use of a Vehicle, and No Valid Registration.