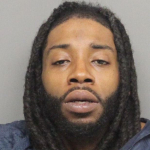 Lincoln Police were called to the Sonic Drive Inn at 5601 S 48th Street on Friday, February 19th after receiving a report that a man was passed out behind the wheel of a Nissan Altima.

Officers woke up the driver who gave them a fake name and saw he was demonstrating signs of impairment.   He gave officers permission to search him and they found a handgun in the waistband of his pants.  He was taken into custody and identified as 28 year old Demitrius Perkins.

Officers learned that Perkins was wanted on four warrants.  Due to the level of impairment Perkins was demonstrating he was tested for the potential of being under the influence of alcohol or drugs.  A Drug Recognition Expert determined that Perkins was under the influence of drugs.  He was arrested for DUI-Drugs, Driving Under Suspension, False Reporting, Carrying a Concealed Weapon, and Possession of a Firearm by a Prohibited Person, as well as his four outstanding warrants..