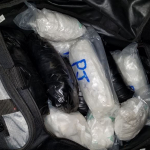 Troopers with the Nebraska State Patrol arrested a California man and seized more than 25 pounds of methamphetamine during a traffic stop in Dawson County.

At approximately 6:15 p.m., Friday, February 19, a trooper observed a Hyundai Azera fail to stop at a stop sign after exiting Interstate 80 at the Overton interchange, at mile marker 248. During the traffic stop, the trooper became suspicious of criminal activity.

A search of the vehicle revealed 26 packages inside a duffel bag in the trunk. 25 of the packages contained methamphetamine, with a total weight of 26 pounds. The final package contained .3 pounds of pills, suspected to contain fentanyl.