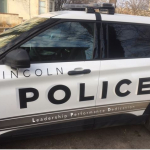 A 17 year old boy is facing a long list of charges after he was arrested Saturday morning near 22nd and Euclid.  Police were informed there was a running vehicle stuck in a snowbank with a person inside slumped over.  Officers found a 2011 grey Nissan Maxima with the driver asleep inside..  The officer was able to wake up the driver, however, the doors were locked, and the driver refused to open them.

Officers located a loaded 9mm handgun on the seat.  The driver was identified as a 17-year-old male who was wanted on an outstanding warrant.  The officer observed the male was under the influence and transported him to The Bridge for alcohol testing where he tested .117.  The juvenile was arrested for Unlawful Possession of a Firearm by a Prohibited Juvenile Offender, Driving Under the Influence, Suspended License, Attempt to Flee to Avoid Arrest, and Resisting Arrest and was lodged at the Youth Attention Center.

The officer and juvenile suffered minor cuts from the broken glass in the vehicle.