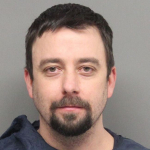 An ongoing investigation by the Lincoln Lancaster County Narcotics Task Force led to the arrest of 36 year old Aaron Satterfield.   He was first arrested on January 20th after he was spotted in a Kia Optima with California plats near 45th and Cleveland.  The vehicle had been stolen out of Saint Joseph, Missouri on December 7th.  Satterfield was seen parking and exiting the vehicle while wearing a backpack.   At the time investigators contacted Satterfield he no longer had the backpack.  He was taken into custody regarding the stolen vehicle.

During a search of Satterfield Investigators located over $1,100 in cash, unidentified pills, a scale, a container and pipe with suspected methamphetamine residue.

The vehicle was searched, and the backpack was located in the back seat.  Inside the bag, investigators located separately packaged bags of suspected methamphetamine totaling 37.5 grams.  They also located several pills identified as Hydrocodone, a schedule II-controlled substance, and a bag containing 16.2 grams of Psilocybin mushrooms.  There were numerous other items of drug paraphernalia found throughout the vehicle as well. Investigators worked with Saint Joseph, Missouri police department reference the stolen auto case. At that time, Satterfield was arrested for felony possession of stolen property.