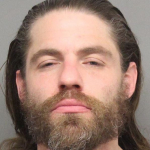 An arrest is made in the attack of a 62 year old man on February 5th at 11th and N Street at 7:45 a.m.  The victim said he had been approached by a man that was later identified as 36 year old Gabriel Sterling.  The victim said Sterling had thrown a small cloth container at his head and then charged him unprovoked.  The victim was then punched by sterling in the body and head a number of times to the point he lost consciousness.  The victim suffered a number of facial injuries and a gash to his elbow from falling.

Officers obtained video surveillance from a nearby apartment building that captured the assault. Using the victim’s description, the video and officers knowledge of known individuals who pass through that area frequently, officers identified the suspect as Sterling.

Sterling was taken into custody on Tuesday, February 16th at the People’s City Mission.   He was booked for felony 1st degree assault.