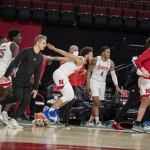 With 1:23 to go, Penn State had the ball with that one point lead. Nebraska forced the miss but gave up an offensive rebound.

Another shot by the Nittany Lions. Another miss. Another offensive rebound.

But no more shots for the home team as Dalano Banton took the ball away and made the pass to Teddy Allen who scored a layup in transition with 12 seconds left.

Out of a timeout, Penn State attacked the rim in the closing seconds, but Derrick Walker knocked the ball away to Trey McGowens, sealing the victory 62-61.

The win snaps multiple streaks: The 26 losing streak in Big Ten games extending back to January of 2020, the 24 game road losing streak, and the five game losing streak at Penn State.

Kobe Webster (13) and Trey McGowens (10) were the only other Huskers to score in double-digits.

Two players that significantly impacted the game away from scoring were Banton and Walker. The former scored seven points but also had a team-high six assists. The latter scored eight points and for the second game in a row held his own against a much bigger post player.

The Huskers shot just three free throws all game, making one. That is the lowest number of free throws shot all season, with 15 attempts against Georgia Tech being the previous low. The last time Nebraska shot less than 10 free throws in a game was at Illinois in February of last season when they shot just nine.

Nebraska now heads to College Park to play at Maryland both Tuesday and Wednesday.