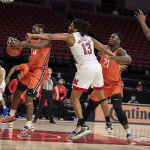 A shot, or a possession, at least. The Huskers never got a shot off as Trey McGowens dribbled out the final 16 seconds of regulation in a tied game. The play never developed, and coach Fred Hoiberg was visibly frustrated with the result.

“The lack of execution on that last play is extremely disappointing,” Hoiberg said after the game. “To draw something up that we think could have at least gotten us a good look to win a game like this and then to go out and have a couple guys in the wrong spots…that’s the hard thing.

“That’s gonna be the one that certainly will keep me up tonight.”

Momentum sat with the visitors and Nebraska didn’t make a shot in the extra period, adding just six points at the free throw line. Illinois prevailed 77-72 to push Nebraska’s conference losing streak to 26.

The Huskers began the game as well as anyone could against a potential Final Four team, hitting three of their first four shots and racing out to a 9-0 lead. Nebraska led by eight with 4:11 to go in the first half before Illinois closed on a 9-2 run.

Finally, Illinois scored six unanswered to tie the game at 64 with 52 seconds left.

Dalano Banto got a layup on the ensuing possession. Illini guard Ayo Dosunmu, who scored a game-high 31 points, tied it back up with a layup on the other end.

Then the final possession of regulation that went nowhere.

National Player of the Year candidate Kofi Cockburn finished with 21 points and 10 rebounds. Hoiberg was pleased overall with the effort from his bigs Derrick Walker, Yvan Ouedraogo, and Eduardo Andre.

“We talked to our bigs about we had 15 fouls to give,” Hoiberg said. “They battled the strongest guy in our league. If they can do it against him, then we should be able to do it against anybody.”

Walker, more than any other Huskers, stood his ground against Cockburn for most of the game. He scored five points and grabbed a team-high eight rebounds.

This was the fourth game in seven days for Big Red. The upcoming schedule includes Penn State Sunday before Maryland both Tuesday and Wednesday. That’s seven games in 12 days across five states.

“After having 20 days off, for people that have played this game, do you know how hard that is,” Hoiberg asked rhetorically. “To take that amount of time and have your bodies deconditioned, and then have to bounce back and ask your guys to go out and compete like they are? And have games stacked up on top of each other? And to play their asses off every time they’re stepping on the floor?

“That’s hard to do, man. Since the first day that we got them, I knew they’d be competitors.”

The Huskers at Nittany Lions Sunday is set for a 2 p.m. tip.