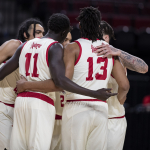 Slowly, but surely, Nebraska men’s basketball is getting the postponed games back on the schedule.

The program announced late Thursday the addition of a game at Maryland next week. The Huskers were supposed to host the Terrapins January 16, but that game, along with five others, was postponed due to COVID-19 issues within the Nebraska program.

Instead of a home game, Nebraska will just stay on the east coast after playing at Penn State Sunday. The makeup game will create an interesting schedule, as Nebraska and Maryland will play  both Tuesday and in the regularly scheduled game Wednesday.

If the schedule holds, Nebraska will play seven games over 12 days since returning February 6.