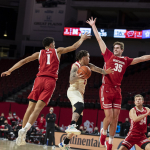 The Huskers made 8-of-12 over the first eight minutes, assisting on every made basket. Some free throws a short time later and Nebraska led 22-14 halfway through the first half.

But then nothing. Only five more points in the first half. Only 10 more made shots the rest of the game.

“We are getting good looks when we move the ball, and we just didn’t do that for a long enough stretch,” Nebraska coach Fred Hoiberg said. “It’s the whole thing when we are out there in the flow you have to continue on with those things that are giving you solid possessions. And then we just lose value of the ball and lose value of the possession. Bad shots lead to good offense for the other team.”

Despite Wisconsin shooting just 32.3 percent for the game, the Badgers went on to win 61-48.

This is the 25th consecutive loss in Big Ten games for Nebraska, dating back to last season.

The Huskers had just three turnovers in the 10 minute stretch to build that eight point lead. The other 30 minutes saw 14 turnovers, resulting in total in 15 Wisconsin points.

“Frustration shouldn’t lead you to throw the ball out of bounds or throw the ball to the other team or jump up and then try and make the pass,” Hoiberg said. “Now we are just going back to bad habits. And when our timing is not probably where it was before the break, it is leading to bad possessions and turnovers.”

Lat Mayen led the Huskers with 14 points, followed closely by Teddy Allen with 12.

*-Nebraska held Wisconsin to 32.3 percent shooting, the third straight opponent NU has held under 40 percent. It is the first time since the 2017-18 season that the Huskers have held three straight conference foes under 40 percent.
*-Dalano Banton grabbed a team-high 10 rebounds. It marked his second double-digit rebound effort and fourth by a Husker this season. Banton has had three career games with at least 10 rebounds and two have come against Wisconsin (also 2018-19 when he was at Western Kentucky).
*-Teddy Allen finished with 11 points, the 13th time this season he has reached double figures.
*-Nebraska is now 0-6 against ranked teams this season and hosts sixth-ranked Illinois on Friday.