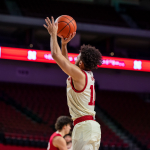 A difficult road through the Big Ten isn’t getting any easier for Big Red.

Nebraska (4-10,0-7 Big Ten) played its second game in three days Monday. Unlike on Saturday, the Husker defense wasn’t stout from the get-go, while Minnesota (12-7, 5-7 Big Ten) came out on fire, making seven straight shots over a four minute stretch early.

Just like in previous games, Nebraska was able to cut into the lead. Minnesota missed 17 consecutive shots in the second half as the Huskers closed the gap to seven.

But the Huskers just couldn’t get over the hump as Minnesota used runs of 9-2 and 6-0 to put the game away at 79-61. This is no 24 losses in a row in the Big Ten Conference, dating back to last season.

Nebraska was without leading scorer Teddy Allen for the game. Coach Fred Hoiberg called it a “coach’s decision” that he made before the game.

Starting in Allen’s place was sharpshooter Trevor Lakes, though he never got open for any looks. Lakes played just under six minutes without scoring.

Nebraska was led offensively by Lat Mayen, who scored a career high 15 points with three 3s made. Just behind him at 14 points was Shamiel Stevenson.

The Huskers are off Tuesday, but get right back to it Wednesday hosting No. 21 Wisconsin.