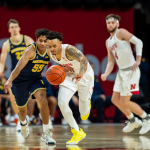 The Big Ten Conference has announced a trio of changes for Nebraska men’s basketball over the next week.

The Huskers will host No. 21 Wisconsin Wednesday at 8:30 pm, in a game that was originally schedule for Thursday. Nebraska will then host No. 6 Illinois Friday at 8 pm to make up the postponed January 13 game. The final move is for the February 24 game at Illinois to be moved to the final week of the season with a new date and time to be announced.