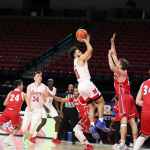 The Huskers at Minnesota on Monday, February 8, will tip at 7 pm, while the February 14 game at Penn State is set for a 2 pm tipoff. Both games will be carried nationally on the Big Ten Network.

Only the next four games are known for start times and where they will be televised. No makeup games have been announced yet.