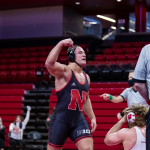 A look at what’s happened in Huskers athletics over the past week.

Nebraska volleyball did not get to play their home opening series against Northwestern due to COVID positives within the Wildcats program.

Nebraska men’s basketball is back in action this week but not as soon as originally scheduled. The Huskers and Spartans pushed their game back to Saturday.

Nebraska women’s basketball earned wins over Illinois and Wisconsin. Senior Kate Cain has been named to Naismith Women’s Defensive Player of the Year 2021 Watch List. The latest ESPN Bracketology has the team on the bubble.

Nebraska cross country has their first ever Big Ten champion in George Kusche who won the 8K in a time of 24:01.2 Saturday. Kusche is Nebraska’s first conference champion since 1992. The men finished fifth and the women ninth.

No. 7 Nebraska wrestling won the final two matches to come from behind and defeat No. 18 Wisconsin 21-15.

Nebraska men’s gymnastics did not compete this week.

Nebraska swimming and diving did not compete this week.

No. 4 Nebraska bowling finished third at the Prairie View Invitational. It was a stacked field where top-ranked McKendree won the tournament by defeating No. 3 Arkansas State. NU placed third while No. 5 Sam Houston State and No. 10 Youngstown State rounded out the top five.

No. 6 Nebraska rifle did not compete this week.

Men’s tennis competed at the Badger Invitational, taking on Indiana, Minnesota, and Wisconsin. No team scores were kept, all seven Huskers who competed picked up either a singles or doubles victory.