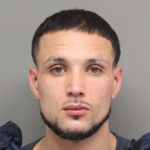 On January 22nd just before 1am, an officer observed a man riding a bike without a headlights or taillights on the street in the area of 41st and Baldwin.  The officer contacted the man who falsely identified himself.  The officer was able to determine the man was, Cody Wilder, 31 years old, who had 4 active warrants, three of which were for Attempt of a Class 4 Felony.

Wilder was arrested for three counts of Possession of a Controlled Substance (Methamphetamine, Dextroamphetamine, and Clonazepam), False Statement to Police Officer, Possession of Marijuana, and Improper Bicycle Equipment.