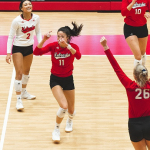 Six sets in Bloomington. All Nebraska.

On Friday, Nebraska’s hitting percentage continued to rise as the match wore on. This time it fell, but Nebraska’s defense plus inexperience and errors for Indiana proved the difference.

Nebraska hit just .228 for the match with 39 kills and 16 errors. The shining statistic was 12 blocks, up from five the night before.

Indiana hit .048 on the match while committing 25 errors.

Nicklin Hames had a season-high 31 assists to go with eight digs.

The Huskers had 43 digs on the night, led by Kenzie Knuckles with 12.

Nebraska is at home for the first time next weekend hosting Northwestern at 6 p.m. both Friday and Saturday.