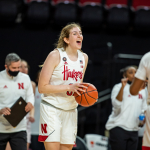 Nebraska coach Amy Williams continues to do more with less.

Down to eight players for much of the season due to injuries, the Huskers (7-4, 5-3 Big Ten) won three out of four games, including wins over No. 15 Northwestern and No. 23 Michigan State. Down to just seven players Saturday, Nebraska did it again to upset previously undefeated No. 15 Ohio State (7-1, 3-1 Big Ten) 63-55.

“We’re genuinely playing just for each other and working really hard day in and day out,” Nebraska senior Kate Cain said. “We’ve worked to know that even if do we have limited bodies, which we’ve had plenty of situations like that this season, to fall back on our training and our practice and just to be confident in our abilities.

“We’re good to adapt and we like to win.”

Sophomore Isabelle Bourne, one of the top players this season, left the Michigan State game last Sunday with an ankle injury. That injury put her in a boot and on a scooter as she missed this one. Her teammates, used to having to play big minutes with this season’s depth issues, stepped up.

What has been the magic recipe? Defense and a complete buy-in from everyone on the floor.

“Our team is so connected and united that they didn’t wanna let Issie down or Trinity or any of their teammates that aren’t able to get out there on the court,” Williams said. “All of them committed to just find a way to bring a little bit more. I thought we really bought into that.”

The Buckeyes averaged 89.8 points a game before heading to Lincoln, and hadn’t scored less than 78. That changed in a big way for Ohio State at Pinnacle Bank Arena as the Buckeyes managed to shoot just 27.2 percent from the field and make only 5-of-27 3s.

“I think our team knows that (defense) is gonna be our best chance to try to have success and to get wins is to really commit to playing on that side of the ball,” Williams said. “It’s fun for me and I do feel incredibly proud to watch them when we put together those type of performances.”

Ohio State scored the first four points of the game, but Nebraska answered with a 7-0 run and never trailed the rest of the way. Things got tight when Ohio State started hitting shots and went on a 16-5 run in the fourth quarter to cut the game to just a three point difference with 1:24 to go.

That’s when Sam Haiby, who was 1-for-10 from the floor got one of the biggest buckets of the game as she drove the lane and earned an and-1. She converted the free throw, and Nebraska scored six of the final seven points in the game.

“Just an ice in her veins kind of play,” Williams said of Haiby’s and-1. “Handling the basketball, double figure assists, and going down and rebounding down the floor…finding ways to continue to be so impactful out there even with a 2-for-11 performance, I thought she was just special.”

Haiby earned her first career double-double with 11 points and 10 assists. Her previous career-high in assists was seven. The junior guard was just an eyelash from a triple-double as well, ending with eight rebounds.

Also nearly with a triple-double was Cain. The 6-foot-5 center shot 10-for-14 to score 22 points while grabbing 12 rebounds and blocking nine shots. Cain nearly got the tenth block with under 10 seconds to go, but she was called for a foul.

“When (Cain) has got things going like she does, wanting and demanding the basketball down low, she has a myriad of ways that she can go and get herself buckets and points,” Williams said. “I just thought she was playing with confidence and that adds a complete different element to our group.”

One of the best rebounders for the team throughout the season has been Bella Cravens. She led the team with 14 rebounds, even while tweaking an ankle and dealing with back spasms throughout the game.

“I remember a week or two into workouts in the summer, I was just like ‘this girl can rebound'”, Cain said of Cravens’s nose for the ball. “It’s insane, her ability to jump and just find the ball wherever it’s at. Whether it’s on offense or defense, it’s so beneficial to our team.”

Freshman Whitney Brown had the best game of her young Husker career. The Grand Island Northwest grad made four triples as she shot 5-for-9 on the game, scoring 14 points.

“I did not think that that would happen (when I committed),” Brown said of playing 28 minutes against a ranked team. “I’m very happy with coach being able to trust me like that.”

As a whole, the Huskers shot 41.4 percent from the floor, including 6-for-22 from 3. Nebraska shared the ball well,

Nebraska will be favored for a change in the next game, hosting Minnesota (2-7, 1-6 Big Ten) Tuesday.