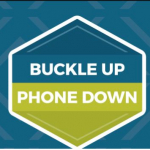 Nine people were killed in traffic accidents on Nebraska roads during the month of December, 2020.