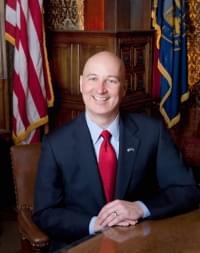 A set of ambitious goals set forth by Nebraska Governor Pete Ricketts at his yearly state of the state adress.

Delivering $1.36 billion in relief over the budget biennium.

“But there’s more we must do to keep Nebraska on the road to realizing property tax relief.  That is why Senator Linehan and I are proposing to limit the growth of local government property taxes to 3 percent,” Ricketts said.

Property taxes have grown by 4.46 percent annually on average for the last 10 years for an overall increase of 54.65 percent.

“Taxes are growing at a rate that Nebraskans cannot manage within their family budgets.  It is my belief that if the Legislature fails to enact spending constraints, the people of Nebraska will take matters into their own hands and strip local governments of their property tax authority.”

“As we consider these limits, I also want to note that we can continue to support strong public schools.  As I have done every year as Governor, my budget proposes to fully fund state aid to the K-12 education formula with an additional $42.7 million over the biennium,” Ricketts said.

“In recent years, Nebraska has made great strides in helping military spouses, who hold a teaching license in another state, to teach while their families are deployed here.  Senator Sanders and I are working together to take new steps recommended by the Department of Defense to cut more red tape in this area.”

“By allowing universal reciprocity for out-of-state healthcare workers to continue, we can encourage more skilled healthcare professionals to choose the Good Life to help meet our state’s needs,” Ricketts said.

“Working together, we’ve been able to make significant strides over the last six years, investing in sentencing reform, rehabilitation, and the physical plant of our system.  But more must be done to modernize and rightsize our prisons,” Ricketts outlined.

By 2025, Nebraska’s corrections system is forecasted to house over 6,400 inmates.  Operational capacity is over 5,300 inmates, and the Nebraska State Penitentiary is decaying. A new prison is proposed

Over 80,000 Nebraska households lack broadband speeds of at least 25/3.

“The pandemic revealed how impossible work from home or remote education can be for those on the wrong side of the digital divide.  Over the last several months, we were able to use CARES Act money to begin connecting 17,600 households with broadband,” Ricketts said.