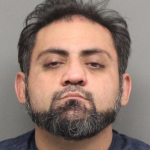 Lincoln Police were called to 1th and F street on January 12th at 9:30 a.m. after a man called saying he was assaulted.  The 37 year old man said his roommate was armed with a box cutter and was assaulted.  He told police that 41 year old Kambis Amjad had left the building and was getting ready to leave in his car.  Police arrived as he was getting inside and they saw two box cutters inside.

The victim was found with a number of scratches on his torso, bruising on his body and face and a cut to his arm.  As officers were talking to hime they called an ambulance due to concerns of a head injury.  He was taken to a hospital with injuries that are not considered life threatening. The victim also told police that Amjab was upset and stated punching holes in the walls and doors.  When the victim tried to intervene, Amjab stuck him several time in the head.  That started a wrestling match and the victim fell through a window causing it to break.