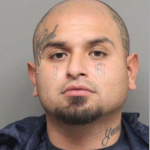 The father of a 19 month old girl is facing charges after he returned her home from visitation on January 11th just after 2 p.m. at 14th and E.  The mother called police and when officers arrived they called an ambulance.  it was apparent the girl had a broke femur.  She also had extensive bruising all over her body.  The girl was taken to a hospital and had surgery to repair the broken leg.

It was determined the girl had just returned from a visit with her father over the weekend.  The father made statements to the mother reporting he was responsible for the injuries.

On January 12th just before 1 p.m., 28 year old Ramon Quijas Jr. turned himself in to investigators.  He was booked for felony child abuse.