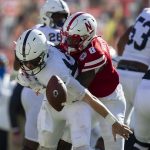 Senior safety Deontai Williams announced on social media he is returning for another season at Nebraska, taking advantage of the extra year of eligibility from the NCAA. Williams says the program has “unfinished business”.

After missing all but one half in 2019 with an injury, Williams bounced back in a big way in 2020. He played in every game this past season, finishing with a career-high 51 tackles.

His most pivotal play of the season came against Penn State when he had a strip sack that he then recovered and returned for a touchdown. Williams was the first Husker to have a sack, forced fumble and fumble recovery for a touchdown on the same play since at least 1962.

Williams is the second senior and third member of the defense to state publicly he’ll be back in 2021, joining Ben Stille and Cam Taylor-Britt.