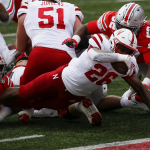 It is official: the running back position in 2021 will look very different than in 2020.

Senior running back declared for the NFL in a social media post Tuesday. Mills thanked his coaches at each one of his collegiate stops: Georgia Tech, Garden City Community College, and Nebraska.

The departure of Mills, along with Wan’Dale Robinson, leaves a hole in rushing production going into 2021. Those two ran for 636 yards in 2020. Returning players not listed as quarterbacks totaled just 90 yards over the seven game season.

Someone that should help pick up the slack is USC transfer Markese Stepp, who committed to the Huskers Tuesday afternoon.

Stepp ran the ball 100 times for 505 yards and six touchdowns in his three seasons as a Trojan. In 2019 as a redshirt freshman, Stepp averaged 6.4 yards a carry before suffering an ankle injury.

Returning Huskers expected to compete for carries out of the backfield include Marvin Scott III, Rahmir Johnson, Ronald Thompkins, and Sevion Morrison.

Feature Image by Joshua A. Bickel/Pool via Ohio State Athletics