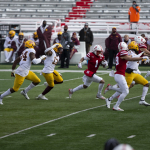 For the second season in a row, Scott Frost and company are losing their top receiver to the transfer portal.

Last season it was JD Spielman, the only receiver in Nebraska history to accumulate 800 yards of receiving in each of three seasons. Now, it is dynamic playmaker Wan’Dale Robinson.

Robinson made the announcement on social media Monday, saying he intends to “find a place closer to my mother and family that will still allow me to achieve my dreams and goals.”

thank you so much, Nebraska🖤 pic.twitter.com/WnqYV9MDvz

Robinson says his mother tested positive for COVID-19 towards the end of 2020, which caused other issues from her health complications. He says being away from his mother during the season hurt.

The Kentucky native arrived in Lincoln a dynamic playmaker, but did not play over the first few games. Once on the field in his debut against South Alabama, Robinson led Nebraska with 131 all-purpose yards. In his Big Ten debut at Illinois, Robinson caught eight passes for 79 yards and two touchdowns while carrying the ball 19 times for 89 yards and one touchdown.

In 2020, Robinson started the season seeing fewer touches, especially in the backfield. That changed as the season wore on. Robinson led the team in receiving with 51 catches for 461 yards and one touchdown while adding 46 carries for 240 yards and another score.

This is the highest profile departure of the Frost era, as Robinson was seen as the face of the program with nobody being featured in recruiting social media posts more. Robinson was also the only player to speak at the unveiling of the $155 million football training facility in 2019.

Most likely to fill the seemingly unfillable role will be freshman Alante Brown, who played in every game as a true freshman but saw his most production on kick return.