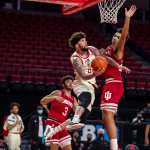 “When you get down 18 points like we did, you spend so much energy climbing out of that hole,” Hoiberg said. “Ultimately, that’s what did us in.”

Trailing 58-44 at the 14:52 mark of the second half, the Huskers went to work with pace and transition. Derrick Walker, making his Nebraska debut after sitting out last season as a transfer and the first 11 games of this season as part of an NCAA suspension, got a dunk to spark a 23-6 run to lead 67-64. Over an 8:18 stretch, Nebraska shot 10-of-11 from the floor.

The problem would be scoring the rest of the way.

Teddy Allen hit a 3 to stop a five minute field goal drought and bring Nebraska to down 77-75 with 2:10 left in the game. After a bucket by the Hoosiers, Allen hoisted another triple which looked like his arm was hit. The official called Allen for kicking his leg out into the defender.

“They called the offensive foul, but looking back at it, we’ll see what it was first: the hit in the arm or (Allen) sweeping the leg,” Hoiberg said.

Instead of three free throws for the Huskers to possibly pull the game within one, Indiana got the ball and closed out the game.

The deficit in the first half grew to 18 as Indiana made 11 of their first 15 shots. Hoiberg didn’t think the defense was bad, saying you just have to tip your cap to a team shooting that well.

“A couple of their guys that were shooting 20 percent (on the season), they looked like they were raising up like they were Ray Allen out there,” Hoiberg said.

With most of the game being a draw, both teams made 15 free throws and nine 3s on 46 percent and 45 percent shooting to go with single digit turnovers, the difference came in extra opportunities. The Hoosiers outrebounded Nebraska 16-5 on the offensive glass, and turned that into 16 second chance points, compared to just three for the Huskers.

“With Yvan (Ouedraogo) out of the lineup for an extended period now, we’re gonna have to find a way with smaller lineups to compete on the glass,” Hoiberg said. “When we’re small like that, we have to do an unbelievable job every time of hitting first.

“When we rebounded tonight, we were great in transition. But we gotta find a way to clean up the glass.”

Allen scored a team high 21 points as five Huskerse scored in double digits. Lat Mayen dropped a season-high of 15 points on 5-of-9 shooting, all from beyond the arc. Walker, Trey McGowens, and Dalano Banton each scored 10 points.

The debut for Walker included three rebounds, two steals, and a blocked shot over 26 minutes.

“I was really excited to be out here,” Walker said. “After not being able to play for two years, my first thought was just to catch my first wind and just play my game.”

Despite having played just one game at Nebraska, Walker isn’t phased by the 22 game Big Ten losing streak, extending back to last season.

“We lost but I’m happy with how we came out and we fought together,” Walker said. “We’re making strides and we’re gonna figure it out.

“We belong in this league and I feel like we can turn this around.”