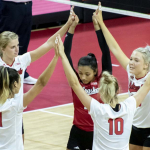 Two Nebraska programs are highly ranked with their seasons just around the corner.

Husker volleyball is preseason No. 5 from the American Volleyball Coaches Association. Nebraska was ranked fifth in the final 2019 poll after going 28-5 and reaching an NCAA regional final. All six starters and libero are back for coach John Cook.

The top four teams in the ranking are Wisconsin, Texas, Stanford, and Kentucky. Six Big Ten teams are ranked in the top-25.

On the mats, Husker wrestling is also slotted at No. 5 from the National Wrestling Coaches Association. Nebraska was fifth in the final NWCA rankings last season before the NCAA Wrestling Championships were canceled due to the COVID-19 pandemic.

Iowa, Penn State, and Michigan are the top three ranked teams. In all, 10 Big Ten schools rank in the top-25.