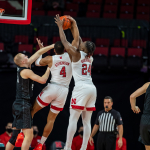 The second missed game of the 2020-21 season has hit for Nebraska men’s basketball.

Earlier this season Florida A&M had to cancel its game with Nebraska. Monday afternoon, the Huskers and Purdue announced their Tuesday, January 5 matchup was to be postponed. Both universities agree to the move “out of an abundance of caution surrounding the health and safety of the student-athletes, coaches and staff.”

A replacement date will be worked on.

With the postponement, Nebraska is next in action Sunday hosting Indiana.