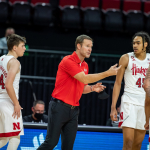 The jury is still out on how the Fred Hoiberg era, now midway through year two, will ultimately be remembered, but one ESPN commentator is decisively in the camp against.

Dan Dakich says Hoiberg is a “unicorn” who “gets great jobs”, insinuating that the head coach at Nebraska has yet to earn jobs at Nebraska or the NBA after his stint at Iowa State.

At ISU, Hoiberg won the Big 12 tournament twice while earning league coach of the year honors in 2012. In Chicago, the Bulls went 82-80 over Hoiberg’s first two seasons, but front office rebuilding moves turned year three into a dumpster fire. Despite not having a fully healthy roster, Hoiberg was let go after starting year four with a 5-19 record.

Hoiberg was hired at Nebraska in March of 2019, just days after Tim Miles was fired.

Dakich made his comments during the Iowa-Rutgers game Saturday on ESPN2 while talking about the depth in the Big Ten. He compared it to being the target in gambling.

Nebraska is winless in the Big Ten through the first four games, but had a lead against Wisconsin and cut the second half deficit to two possessions against Michigan and Michigan State before ultimately coming up short.

Play resumed as an Iowa player was poked in the eye, taking the conversation to the incident, but Dakich brought it back to Nebraska saying the Huskers have “the best fanbase” and are going to elevate the league if they can get the program turned around. That’s when Dakich made his preference for leading Nebraska known.

“I thought Tim Miles was building something,” Dakich said. “Tim Miles is out of a job (after) building this thing.”

Miles went 116-114 in his seven seasons at Nebraska with one NCAA Tournament appearance. His final season saw the Huskers finish 13th in the league, the worst finish in the Miles era.

Dakich is not a fan of how Hoiberg has rebuilt the roster in his short tenure, mainly bringing in transfers.

“When I watch Nebraska, you know what I see,” Dakich asked his partner Jason Benetti. “You know, when you go recruit junior colleges sometimes nobody trusts each other because guys wanna get theirs so they can to a division one scholarship? That’s what I see with Nebraska.”

The Huskers have two junior college transfers, both of which played division one basketball before going the juco route. Despite a number of shot creators that unarguably need to move with more purpose off the ball on offense, only Teddy Allen has shown a proclivity for volume shooting no matter the outcome.

Even so, Allen is shooting 44.7 percent from the field for 18.2 points a game. It isn’t the “get mine” mentality that is hurting Nebraska men’s hoops right now. It is the inability to consistently make open shots on offense while at times getting down on defense when shots aren’t dropping.

Dakich added that Nebraska “won the press conference” with Bill Moos hiring Hoiberg, but compared it to Michigan with hiring Juwan Howard. Under Howard, Michigan went 19-12 in year one and is a perfect 9-0 so far in year two. The difference in programs is easy to identify, with Michigan’s history of Final Fours being as recent as 2018, and the season before Howard’s hire saw the team reach the Sweet 16. Howard should have Michigan ahead of where Nebraska is.

Fred Hoiberg might be just another in long line of Husker men’s basketball coaches to end up in Lincoln only to leave empty handed with no conference titles or tournament wins. Or he might take Nebraska further than it has gone before. Is Dakich right, or are the most optimistic of fans?

Time will tell, but halfway through year two with a rebuilt roster that has yet to feature its full slate of players is too early to reach a verdict, even for the former Bowling Green coach who had losing seasons four of his final five years.