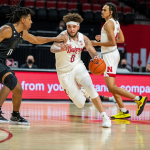 Yet another game of a shot making drought pushing the game just far enough out of reach for Nebraska. The Huskers took a two-point lead on a pair of Dalano Banton free throws with 7:29 to go in the first half, but proceeded to make just two shots the rest of the half to trail by seven at the break.

The Spartans scored 12 of the first 14 out of halftime to extend the lead to 17. That’s when Teddy Allen started to make shots.

Trey McGowens and Teddy Allen took over different halves. McGowens went off for 15 in the first while Allen scored 19 in the second. The two combined for 43 points on 16-of-28 shooting. The rest of the Huskers scored 34 points on 11-of-27 shooting.

The Huskers cut the deficit to as little as five in the closing minutes, but offensive rebounds and free throws put the game out of reach for the Spartans.

Foul trouble plagued the Huskers in this one. Both Lat Mayen and Allen sat much of the first half with multiple fouls. Mayen fouled out with 2:40 left having scored eight points in just 15 minutes of playing time.

Nebraska’s last conference win came January 7, 2020 against Iowa. If the Huskers hope to avoid going winless in the Big Ten for a calendar year, they’ll need to win Tuesday at Purdue (7-5, 2-3 Big Ten).