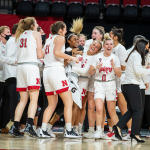 Tied at 61 with under two minutes to play, Haiby got a layup to give the Huskers the lead. The Wildcats answered with a bucket on their own end. After both teams missed shots, Haiby drove the basket in the final seconds and missed, but she grabbed her own rebound and flipped the ball towards the cylinder just as the horn sounded.

“A couple big buckets down the stretch just show the warrior that she is,” coach Amy Williams said.

Haiby scored a team-high 19 points on the afternoon while adding eight rebounds. Ashley Scoggin and Isabelle Bourne both scored 11.

The Huskers shot 44.4 percent from the field, including 9-of-20 from 3. Both of those figures were significantly better than Northwestern on the day (35.3 percent, 5-of-16 3s), but Nebraska committed 24 turnovers which led 23 Wildcat points.