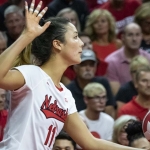 Less than a month before the delayed season can officially get underway, Nebraska volleyball has a schedule.

Big Ten Conference teams will play a 22-game schedule within the league over 11 weeks with two games each week against the same opponent.. The Huskers open their season at Indiana January 22 and 23.

The first home games are January 29 and 30 against Northwestern.

“We are so excited to finally know the who, where and when of our schedule for spring of 2021,” Head Coach John Cook said. “The Big Ten and coaches worked hard to come up with a fair and competitive schedule for everyone. Playing the same team back to back will really bring out the best in teams and coaches. Husker Nation will be fired up to watch Big Ten volleyball.

“There is no room for error or playing into the season. This schedule is like riding a horse in the Kentucky Derby. Get out of the gate and hang on for a wild ride.”

The NCAA Tournament begins with first and second rounds April 8-10, followed by Regionals April 15-17, Semifinals April 22, and the NCAA Final April 24. The Semifinals and Final are set to be played in Omaha.