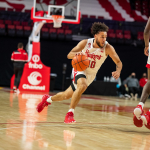 Typically this season, the Huskers stayed in game through the first half before a second half drought put the game out of reach. In Columbus, Nebraska pushed that drought up to the first half.

Tied at 13 just over six minutes into the game, No. 25 Ohio State (8-2, 2-2 Big Ten) tore of on a 25-8 run into halftime. That run was bolstered by Nebraska going more than 10 minutes without making a shot. The Huskers made just one shot from the field over the final 13:15 of the first half.

A three-point-play out the gate by Trey McGowens made it look as though Nebraska might put up more of a fight in the second half, but those thoughts were quickly erased. The Buckeyes answered that initial possession with a 32-5 run and lead by 41 with 9:44 to go. That cushion was enough for Ohio State to coast to the 90-54 win.

Only one Husker scored in double figures: Teddy Allen with 13. Nebraska finished shooting 28.3 percent from the field and 5-of-33 from 3.

Part of the reason for the poor shooting was ball movement. Nebraska had a season-low three assists in the loss, as players continuously took contested shots or tried to make things happen on their own. The Huskers have nine total assists over the last two games after averaging 15 per game through the first eight contests.

With a tumultuous 2020 coming to end, the Huskers won just five games over the calendar year. The only win over a power conference teams was the January 7 upset over Iowa.