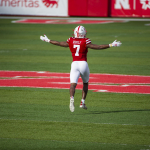 A third member of the Husker football senior class has opted to try his luck at the next level.

Defensive back Dicaprio Bootle took to Twitter Tuesday to thank Nebraska for “endless love and support”, adding that “coming to Nebraska was the best decision I ever made.”

“With continuous thought and prayer,” Bootle said. “I have decided to enter the 2021 NFL Draft.”

ALL PRAISE TO THE MOST HIGH!

The Miami, Florida native got his first start as a freshman and never gave up his spot: running off 32 consecutive starts. A team captain in 2020, Bootle finishes his career with 110 total tackles and an interception, an overdue pick against Iowa this season.