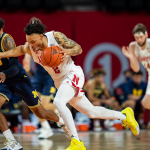 Old Saint Nick dropped off the gift of a first half hot hand and unbelievable second half shots, but Nebraska (4-5, 0-2 Big Ten) had just enough of a drought after halftime to end up on the Naughty List and fall at home to No. 19 Michigan (7-0, 2-0 Big Ten) 80-69 on Christmas Day.

After missing the first three shots, the Huskers made seven of the next eight to go up 18-15. The shooting cooled off the rest of the half, but not before Teddy Allen scored 21 points on 8-of-17 shooting to help Nebraska trail by just two at the half.

Out of the break, Trey McGowens made back to back 3s while nearly drawing fouls on both. Later in the half, McGowens exploded for a dunk in transition out of a steal as part of an 11-2 run. But the now familiar tune of a drought and opponent run had done its damage.

Michigan started the half on a 17-7 run as Nebraska had field goal droughts of 2:26 and 3:53. The Huskers also went 12:23 from late in the first half to well into the second from without making a shot inside the arc.

An 11-2 run by Nebraska cut the deficit to as little as four, but Michigan’s size and offensive patience down the stretch were too much.

That size for the Wolverines helped them to a 43-31 edge in rebounds, led by 7-foot-1 freshman Hunter Dickinson with 15. The tallest Huskers that saw the court were 6-foot-9.

Allen made just one basket after halftime to finish with a game-high 25 points. Dalano Banton (17) and McGowens (15) also scored in double figures.