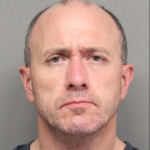 Lincoln Police made several trips to Spare Room Storage at 4101 N 27th Street in the past few days.  Around 6:30 p.m. Tuesday night they were called after a man reported he saw sparks and a man cutting a padlock from a storage unit.  The witness walked up to the man who gave an explanation as to why he was cutting the lock and then got into his vehicle and left. The witness was leery and followed the vehicle while talking to police dispatch until it pulled over at Paxton Drive and Fairfield Street.

Officers found the vehicle and spoke with 45 year old Jeffrey Blazek who was inside the vehicle.  Officers saw an angle grinder on the passenger front floor board – which would be a tool used to cut a padlock.  They searched the vehicle and found three cut padlocks, a chain saw earlier stolen from a storage unit the day before, a flashlight and a lock picking kit.

Blazek was booked for burglary, attempted burglary and possession of burglar’s tools