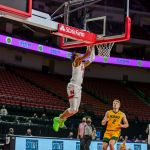 Nebraska couldn’t shoot much worse and still almost won the last time out. That wasn’t the case Saturday in the final game of the Golden Window Classic from Pinnacle Bank Arena.

The Huskers (2-1) made four of their first five 3s to race out to a 19-4 lead. That cushion made things easier on a Nebraska team that shot just 9-of-41 Thursday against Nevada.

“It was a great bounce back game for us,” Hoiberg said.

North Dakota State (0-2) put on pair of runs in the first half to close the gap to single digits twice, including a 3 to end the half, cutting the Nebraska lead to 43-36 at the break.

Slow and steady in the second half help Nebraska open things up with a 10-1 run before eventually leading by as much as 26 en route to a 79-57 win.

A concern for Nebraska, just like last season, was the rounding. The Bison won the battle of the boards 51-42, including 22 offensive rebounds that results in 24 second chance points.

“We gotta go and make a physical cutout,” Hoiberg said. “We just don’t have a lot of length out there right now. We gotta get into bodies before they can hit us.”

Dalano Banton once again flirted with a triple-double. The 6-foot-9 guard finished with 12 points to go with team-highs of nine rebounds and eight assists.

Teddy Allen led the Huskers with 22 points, adding seven rebounds and five steals. The Boys Town grad has 13 steals through three games. That has contributed to the Husker defense forcing 21.6 turnovers per game.

“We know if we get stops and rebound that ball we’re gonna run,” Banton said. “There’s gonna be a lot of teams that are gonna have trouble keeping up with us.

“Defense is gonna be the reason we win a lot of games.”

Trey McGowens was held scoreless Thursday against Nevada, but bounced back Saturday with 19 points and five rebounds.

“I tried not to sulk (after Nevada),” McGowens said. “My biggest thing this game was no first half fouls so that the second half I can play free.”

Lat Mayen was the final Husker in double figures, tallying 12 points on 4-of-7 shooting, including a trio of 3s.

The Huskers finished with 46-percent shooting, including 9-of-32 from deep and 12-of-20 at the free throw line.

Lincoln East grad Sam Griesel got the start for the Bison, finishing with nine points and 12 rebounds.