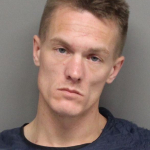 An arrest is made in a burglary November 15th in the 400 block of South 42nd Street.  Police say the victim told officers that someone had stolen a nail gun and a drill from his garage.  A neighbor noted there was a suspicious person and a vehicle in the area at the time.  Using that information, officers developed a reason to believe the suspect was 32 year old Bryce Pierce.

On Saturday, November 21st at 9:45 a.m. Nebraska State Patrol troopers stopped a vehicle on Highway 77 and Bluff Road.  Pierce was the only occupant.  Officers interviewed Pierce and based on his statements and evidence gathered prior to questioning, he was booked for felony burglary.