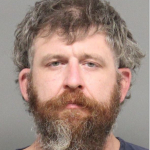 Lincoln Police are investigating a hate crime after a terrifying experience for a woman  Saturday, November 21st at 1:40 p.m.  Police were called to the 1700 block of North 68th Street for a disturbance.

Police talked to a 25 year old woman and several witnesses.  The woman said she arrived at her apartment building and reached the base of the stairs when she was confronted by a man with a chainsaw.  She and witnesses say the man revved the engine and said “Get off my property”, followed by a racial slur.  He then walked down the stairs toward the woman while swinging the saw up and down in a cutting motion.

The woman ran screaming away from the man who continued to yell, “Yeah, you better run”, followed by additional racial epithets.

Police contacted 41 year old Daniel Stueck who told police he was upset that African Americans had been stealing from him and the victim “was guilty because she was black”.

Officers booked Stueck for terroristic threats, enhanced as a hate crime, which is a felony.